Weekly Outsource with Lies of a Murderer 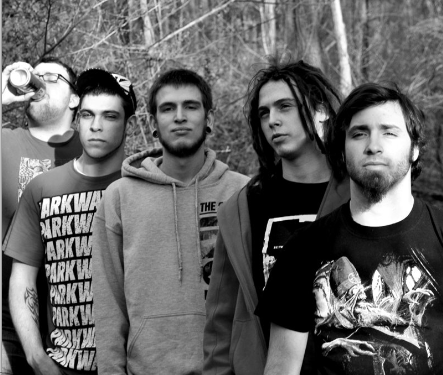 Lies of a Murderer is a melodic metal-core band from the Lehigh Valley located in Pennsylvania.  SITR decided to change it up for this weekly outsource, bringing you a hardcore band. Enjoy!

Interview with Lies of a Murderer

SITR: Know most of you guys are from the Lehigh Valley, how is the music scene there and also specifically for metal hardcore bands?

LIES: To be honest, for us “local” bands, there is a huge lack of promoters, who are willing to really go out of their way to help get your name out there, unless there is a nice $ Bill sign behind it.
Although, there are still a couple really chill dudes around here that still do it for the love of the music and those are the ones, who truly are keeping this scene alive.

SITR: Who are the biggest influences for the band?

LIES: See.. this is a hard one, because we all come from such different musical backgrounds. Yet, we feel that’s why we get the individual sound that we believe we have. So…

–Paul: Pantera, Killswitch Engage, (OLD) All That Remains are probably my strongest influences as far as what/how I write for this band. Some of the material out of such as: 211 mark dates back from my freshmen year in highschool so since then it has just accumulated to more metal, newer metal bands: The Air I Breathe, August Burns Red and etc…

–Andrew: The Ghost Inside, Despised icon, The Black Dahlia Murder, Misery signals..these are a few of my favorite bands and if you listen to them you’ll understand where my playing/writting style comes from.

–Taylor: I have many of the same influences but also The Faceless, Slayer, Municipal Waste, along with some Primus and Rush.

–Mappy: Jayson Green from Orchid, Jesse Alford from Embrace The End, Anthony Gunnells from Through The Eyes Of The Dead. chyea chyea chyea!

SITR: Is there anything difficult about being a metal hardcore band?

LIES: Many things are to be honest…

1) Even just in this area there are a lot of people trying to do the same damn thing we are doing, which is to be “seen”. The main objective is to be different than the others and to push harder than the rest to really show and prove this is what we want.

2) Another thing is having people that actually like the screaming end of it. To the “general public” screaming is sort of “Too Much” so they stray away. So right there, we lose a lot of potential fans, only because of the cliche outlook the public has on screaming itself.

SITR: Have you guys been playing shows and are there any shows coming up we should know about?

LIES: Playing show is essential to us, being the biggest source of any publicity we get. So we really try to get on any show that is at least genre fitting. All of them (so far) have been within the Valley except for a small show in Philadelphia.

At the moment we have 1 show scheduled for February 4th, 2011 at The Silo in Reading, PA. Details can be found on our facebook page for future shows.

SITR: Have you guys played with any major bands yet, if not are there any hopes to and who would they be?

LIES: Yes, we have played with a few “bigger” bands. So far consisting of:

We hope to play with really any of our influenced bands.. We feel given the right chance, we can really show them what we have, and show we deserve the chance to do what they do everyday… tour.

SITR: Where do you guys see taking your music in the next 6 months to a year? Is there a future for “Lies of a Murderer?

LIES: Without a doubt there is a future for LOAM. There are entirely too many hours of devotion and hopes into this to fall anything short of a future. Our Material has GREATLY Improved in the past Year we have been a band writing as a whole. The amount of fan base we have gathered in the short time we have been together has been AMAZING. The support of fans is what keeps us together. It’s only up from here…

SITR: Speaking of “Lies of a Murderer”, where did the inspiration for the name come?

LIES: A chill ass reggae band from Cali called Tribal Seeds, has a song with that phrase in the lyrics..so we jacked that shit. You should check them out for sure, www.facebook.com/tribalseeds

SITR: Have any special goals(accomplishments) been met that we should know about?

LIES: Our EP “The Uprising” was recorded with a seasoned producer/engineer, in a multi million dollar studio. We tracked and premixed all 4 songs in one 10hour studio session (with the exception of the post production work.) We feel that’s a pretty solid accomplishment.

SITR: Will you guys be releasing an EP or album anytime soon or just sticking with the latest release of “The Uprising”?

LIES: We are still trying to get that material out in the open seeing as it is fairly new, but we have new material that can be heard at our shows. We’re hoping to get some recognition with The Uprising before the new stuff is recorded. SO CHECK US OUT!!

SITR: Lyrics can be tough to follow at times from metal hardcore bands, but what kind of things are your lyrics based off of?

Straight from the horses ass:
“I generally write my lyrics about my personal life, whether it be family/friends and their addictions, struggling with depression, cutting people off for being drama queens, alcoholism, etc. sometimes I write about positive things though, like smoking tree, or going to the beach.”- Matt (liferuiner) Twardzik

SITR: Do you guys have any last words of wisdom, or shout outs that need to be made?