What We're Listening To!

Kristen Costa
Mainstream Music, Music
Comments Off on What We're Listening To! 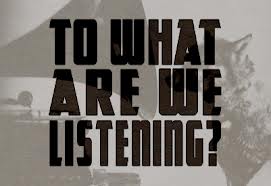 We here at State in The Real are always here to provide you with all the Penn State music news you need. So have you ever wondered what we listen to when we’re not keeping you updated and informed? Well look no further! Here’s some tunes we can’t stop listening to, hope you enjoy!

MONICA: “Someone” by the Red Hot Chili Peppers. This is a B-side from the By The Way album that I recently started listening to a lot more. It’s such a beautiful song and it will always be one of my favorites.

“Hard Out Here” by Lily Allen. This is song is just so. damn. good. I was so sad when Lily announced she’d be retiring and the fact that her comeback is such a massive success makes me confident that she’ll feel comfortable sticking around for a while, which is lucky for us.

JENNA: “You Make Me” by Avicii. This is the song I now automatically turn on when I’m getting ready to go out, working out, or walking to my early class –aka my pump up song. Good work Avicii

“Cryin’ Wolf” by ZZ Ward Featuring Kendrick Lamar: ZZ Ward could be my favorite artist right now. All of her songs, especially this one, make me wish I was a female rockstar.

MIKAL: “In Too Deep (Apollo Remix)” by Sum 41. This song is blowing up on EDM blogs everywhere, which is crazy because it’s a remix by PSU students. Representing the Penn State music scene real big right now.

“Adam’s Song (PRFFTT & Svyable Remix)” by Blink-182. This song instantly takes me back, while keeping me in the now with the EDM remix element. Adventure Club dropped this track in the middle of their set a couple weeks ago and the crowd went NUTS.

LEYA: “Holidays” by Lydia. Since this song dropped on the Devil album in April, the entire album, but especially this song, has spent more time playing through my speakers than mostly any other. This is one of those bands you think about being a music whore with and not sharing the awesomeness of their music but then decided that you could never hide a talent like that. I like this band because they are still in the small time and I especially love this song because it has such a chill vibe and it accentuates Leighton’s lyrical talent. Firstly this song reminds me of a better time, secondly it makes me want to jump in the car, go pick up the love of my life and move to Chicago on a whim.

“Bloodshot” by Aunt Martha. This is yet another band that I love because they are still in the small time. This song is one of their best. I love the chorus and lyrics because they paint a picture in my head. I could and do listen to this song on repeat for hours.

MISUN: “Beware” by Big Sean ft. Lil Wayne and Jhene Aiko – I love listening to this song because it’s very upbeat and it instantly wakes me up. The message behind the song isn’t really happy but I really like the melody and the beat behind it. I also really like it because it has different kinds of music in it as in I love songs where it has rap then it also has singing.

“Make It Home” by Hoodie Allen ft. Kina Grannis – Like I said with the other song I like the combination of singing and rapping together so that it’s not only one type of music style. I like the lyrics too because it’s pretty inspirational and a good song to look up to. This song and the other are pretty different but I think I could listen to these for days.

CHRIS: “Aura” by Lady Gaga. I’ll admit, against my better judgement I’m a HUGE fan of Artpop, especially this song. With Zedd at the helm, Gaga whizzes through the guttural, grimy breakdowns and spine-tingling guitars, and “Aura” serves as one-part love song, one-part ode to the chaotic, wild, dangerous ride to fame. It’s dizzying and danceable all at once.

“Trees” by Twenty One Pilots. I didn’t discover Twenty One Pilots’ January release Vessel until late September, but I haven’t stopped listening since. If My Chemical Romance and Passion Pit had a musical love child that developed an affinity for rap, it might sound something like their unique brand of tunes. “Trees” doesn’t feature vocalist Tyler Joseph’s signature flow, but what it does offer is that mix of sugary electro-pop and bleak, haunting melodies that have made Twenty One Pilots such a sensation.

ERIC: “Frown” by Title Fight. I love Title Fight. Their music, especially Floral Green, is very fitting of Fall weather. This song specifically has one of my favorite guitar riffs of all time. The band paid a lot of attention to guitar tone on this song/album, and it really shines through. If you’re not a fan of the full band version, they do a killer acoustic version of this song on YouTube.

“Drone” by Sainthood Reps. Sainthood Reps is a band which features Derrick Sherman from Brand New. The band’s last album, Monoculture, sounded very similar to Brand New’s last release Daisy. But with SR’s new album Headswell, the band has shown that they’re their own entity, and that they’re a force to be reckoned with. Another Fall-esque song/album, “Drone” is a mellow jam that ironically packs a punch at the same time. Again, the guitar tone is crucial here. In addition to the distant vocals, the distorted, high-pitched guitar leads are a nice touch.

COURTNEY: “WTH” by Jhene Aiko feat. Ab Soul. I just love her melodic voice. It’s so calm but at the same time has passion behind it. She brings me into a peaceful place. I might’ve got way to high—It’s no secret that Jhenê is best friends with Mary Jane. The beat of this song embodies that feeling that you get when the world seems as if it’s spinning, it’s very trippy. I love It!

“I B On That” by Meek Millz feat. Nicki Minaj and Fabolous. This is song is off of his most recent “Dreamchasers 3” Mixtape. Now, I’m not a big Meek fan… That’s because I feel like a lot of his songs sound alike. But when this song comes on I get so hype! It’s me hoe! It’s me hoe! / Walk in this bitch, I fuck shit up then I leave hoe.  That’s exactly how I feel when my friends and I walk into a party.

“In The Morning” by Bridget Kelly. I hadn’t heard this song before attending the concert at levels last week but it had been stuck in my head the whole night after. When I woke up the next morning, I was still humming the song (Because I didn’t know the words). Finally, I had had enough and downloaded it. I’ve been listening to I ever since. Yup, I’m one of those girls who professes their true emotions only through drunk text messages.

ATISHA: “Chocolate” & “The City” by The 1975 have become the two songs I have on repeat lately! I’m not sure where The 1975 have been hiding, but ever since I discovered them, I can’t help but love their brit rock/indie vibe.

“It’s About Time” by Young the Giant! I have loved Young the Giant ever since I’ve heard their song “Cough Syrup,” but I like this song even more. The beat gets me tapping my foot every time. It is something different from what they have done in the past! I love it!

AIZYA: “Diane Young” by Vampire Weekend. I hadn’t thought much about this song until I saw them in concert last week, and ever since it’s been stuck in my head. In true Vampire Weekend form, the song is catchy and upbeat and I can’t help but sing along to it.

“Team” by Lorde. I love the intro and the way the sound changes up during the song. It seems like just a powerful, simple song.

BRANDON: “Origins” by Tennis (or any other song by Tennis). These guys have been playing nonstop on my ipod since I first found out about them. Two young lovers from Colorado making trippy yet familiar sunny pop music? Yes please. I recommend the entire Young and Old album if you dig this song.

“Good As New” – by Vacationer. I find myself singing the chorus of this song everytime I’ve been in a good mood lately. This song is an awesome blend of swirling hip hop samples and indie vibes. When this song is playing, I feel like I’m cruising down some sun soaked highway with the top down and not a worry in the world. Listen to it when you feel like sunshine.

COLlIN: “Connect” by Drake from Nothing Was the Same. Nothing Was the Same blows my mind every time I listen to it. I love every track on the album but for some reason “Connect” stands out. I appreciate the contrast between this song and it’s predecessor “Hold On, We’re Going Home”, which is much more upbeat. The way the beat crescendos into a driving force by the end of the track gets me every time.

SAM: “Elevated” by State Champs. State Champs released their second full length this fall titled The Finer Things and it is by far my favorite release of the fall 2013 season and maybe even the entire year. “Elevated” is one of my absolute favorite songs off the new album and I can’t stop listening to it. If you’re a fan of solid pop punk, I’d definitely recommend State Champs, mostly because Derek DiScanio’s voice is just incredible but also because they’re really good.

KRISTEN: “The Monster” by Eminem ft. Rihanna. I’m not going to lie, I’m not the biggest fan of Eminem, but when him and Rihanna come together it is absolute kryptonite for me. That being said, I think this collab is a million times better than “Love the Way You Lie”. I love the bit of acoustic guitar in the beginning and the bridge, gets me every time.

“Stay The Night” by Zedd ft Hayley Williams. This is one I’ve had on repeat for days on end, no breaks. This style is so far from what we’re used to hearing Hayley sing, but it really works for her. And Zedd is unreal. I wish I would have been at the show when he was here.